I’m having a very difficult pain flare-up. I won’t go into detail about why in this particular post because that’s not what’s troubling me… I get pain flare-ups of different shapes & sizes every so often. It’s part of life with neuralgia. Some are more difficult than others. What I’ve learned over time, however, is that often the emotional drain on my relationships is worse than the physical pain itself. It takes a toll.

END_OF_DOCUMENT_TOKEN_TO_BE_REPLACED

I get a lot of people asking me all the time “so are you getting better?” I’m happy to report the answer is yes, but it’s slow going. I still haven’t gotten back to where I was before the injections yet, so I expect I lost about a year of progress in that ten minute procedure last summer. But I’m back to the point where I’m able to walk a bit, get more done around the house, and I’m starting to see friends more again. This is big news for me, even though I’m still in a lot of pain. It’s manageable pain and I can make it to work meetings and appointments with my cushion and pain meds. That’s progress. 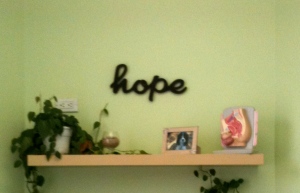 (Photo from the office of my new physical therapist.)

END_OF_DOCUMENT_TOKEN_TO_BE_REPLACED

Glancing back 16 months ago, I found a post I wrote at the Silicon Valley Moms Blog, entitled “Coping With Chronic Pain – Two Years and Counting…” Due to their posting requirements, I can’t reprint the entire thing here without permission, but you can click on it and read it there, and I’ll include some excerpts that I thought were relevant at this point to reflect upon.  Keep in mind that I wrote the post because we were doing a topic day on ‘coping.’

I finally got to writing this post at the end of our topic day because – well – I spend so much time on various forms of coping, one of which is a deeply ingrained talent for keeping too busy. Actually things are much, much better for me in terms of my health and the chronic pain. (I usually don’t repeat adjectives, but really, they’re a lot better.) So I can’t complain and I’ll try not to make this sound like it, but your life changes when you suffer from severe injuries. Gradually, as you realize you may never be the person you once were, your perspective becomes altered.

END_OF_DOCUMENT_TOKEN_TO_BE_REPLACED

I’ll admit there are a lot of sad aspects to living in chronic pain. It’s no picnic any day, regardless of how it’s viewed. But at least I have the benefit of some experience. Pain from two different sources that lasted five years qualifies, doesn’t it?

In 1996, I took my first job after graduating from college. I was excited to be working at a small company as a contract systems administrator. It was a great experience professionally. Physically, however, it was a ticking time bomb.

END_OF_DOCUMENT_TOKEN_TO_BE_REPLACED

It’s all about toast.  I really love toast. In college, my cinnamon & sugar toast became so famous that I actually was teaching friends of friends how to make it just right.  (That was about the extent of my cooking skills anyway.)  Toast has also become a theme in my management of pain the past four years because it’s an easy way to explain the good days vs. the bad. On the good days, I can stay standing next to the toaster, doing other things in the kitchen while my bread toasts.  On the bad days, the pain is so severe that it hurts too much to even stay standing long enough to toast the bread.  That’s about 4-5 minutes.

This pain began with early bed rest in my first – and only – pregnancy.  I started bleeding a few days into the pregnancy and was having a lot of abdominal pain.  The doctor advised me to take it easy and my husband had to keep reminding me that in 80% of cases, early bleeding was not an indicator of miscarriage.  So I rested.  Over the next few weeks, the embryo developed just fine and we could see the little pulsating blob on the ultrasound, which we named Dot.  Still, the first trimester kicked my a** and I was exhausted all the time, I couldn’t focus well, and I was in a lot of pain as the ligaments stretched (and it’s possible the stretching of my nerves in the pelvic area began here as well.)

END_OF_DOCUMENT_TOKEN_TO_BE_REPLACED

Search Pain In The Mom